Growing up Christadelphian and gay

One of my earliest memories is being carried in my father’s arms to the front of the ecclesial hall, where I was presented with a book. It was my first Sunday School Prize Giving. I came from a Christadelphian family; although my father had converted from the Church of Ireland, my mother always said that she had relatives—ancestors, really—that were Christadelphian back in the days of Dr Thomas.

The Sunday School was a big part of my childhood, and from my early teens the Sunday evening lectures were too. Not quite eighteen, I was baptised in the early summer of 1993, during the first year of my A-levels. In those days, with the earnest intensity of the recently baptised, I used to photocopy favourite articles from The Christadelphian and The Testimony. I kept them in a folder in my school bag, so I could read them in the bus going to and from school, and in quiet periods in the sixth-form centre. I remember that if the articles were photocopied onto A4 paper, there were always good margins for making notes, and I made copious notes.

I can remember the nervousness I felt the first time I read the daily readings at the memorial service, and I can remember the difficulty I had the first time I had to give the closing prayer. Shortly afterwards, an elderly brother (who was a sort of grandfather to me) gave me three pre-written prayers, on the back of old greetings cards, to keep tucked in the back of my Bible—that way I’d always have a prayer I could read aloud if I was called upon unexpectedly.

By this time I was already carrying a burden that I didn’t know I had. I was gay, but I didn’t yet realise it. I had experienced some strange feelings towards a couple of my friends at school. I knew this was wrong, and I prayed about it, and I managed to forget about it.

I completed my A-levels and went to university. Naturally I attended the breaking of bread at the local ecclesia. In my college I was actually known for being the guy who used to go our every Sunday morning with a Bible tucked under his arm. I used to leave copies of the Christadelphian Office pamphlets in the common areas of my college. I seem to remember that Israel: God’s People, God’s Land was particularly popular.

I didn’t get on well win the other students on my course, and as a result I spent a lot of time in the computer room. It was the early 1990s, and I set up one of the first Christadelphian websites. I suppose I could be considered one of the Internet Pioneer Brethren. 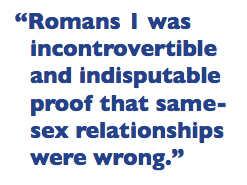 In my second year at university I realised I was attracted to some of the other male students (and one in particular). For the first time in my life I understood what those feelings meant. I knew I was gay.

But of course I was a good Christadelphian and I knew what the Bible said about such things. I read and re-read Genesis 19; Leviticus 18.20 and 20.13; 1 Corin- thians 6.9–10; 1 Timothy 1.10; and of course Romans 1. I understood what they said, and they said that same- sex relationships are wrong.

A few months later, in an online discussion, Romans 1 came up. To me, Romans 1 was incontrovertible and indisputable proof that same-sex relationships were wrong. Anyone who thought you could be Christian and gay must surely reject that passage. In the discussion I rhetorically asked “what else could it mean?” Much to my surprise, someone explained that it could mean something else: not everyone understood those passages in the same way that I did. This was the first time that I realised that so-called “gay Christians” don’t reject what the Bible teaches, they simply understand it differently. I realised that this was not an argument about scriptural authority, but merely one about scriptural interpretation. Privately I began to study the arguments that gay Christians use, not to show myself that it was okay to be gay, but to show gay Christians that they were wrong. Privately I came to believe that you could be a faithful disciple of Christ and be gay.

Around the time I graduated from university and returned home permanently, the number of speaking brethren in my home ecclesia declined sharply. To help keep the ecclesia going, I had to become a presiding and exhorting brother. That was not easy for someone as introverted as me. Over the next couple of years, I became more and more involved with running my ecclesia, to the point where I was spending so much time with ecclesial work that I nearly lost my day job.

Throughout this time, I was still gay, and I was still single. By 2005, for the first time in my life, being single was becoming too great a burden to bear. It is not good for a man to be alone, and every day, every night, I felt the truth of that teaching. When I had decided to remain single, I thought I had been committing to a sexless life. I had actually been committing to a life without even the possibility of companionship and partnership. That is a very different thing. For the sake of the ‘weaker brethren’ I had killed, or allowed to die, several nascent relationships by this point. That made the loneliness much worse.

I was one of the Internet Pioneer Brethren. That was fun, and it definitely helped me through a very difficult time at university. There was a downside to it though. Some people believed that I was responsible for every Christadelphian website, not just my own. (I once got an email that began, “Dear Joe, I was interested to see you have a PhD in mechanical engineering.” For the record, I am not called Joe, nor do I have a PhD in mechanical engineering.) In 2005, I received an email that accused me of teaching false doctrine on the Internet, and accused me of being gay. The email itself was quite threatening, and was actually investigated by the Police Service of Northern Ireland—that is another story though. Additional information was sent to a member of my ecclesia, and the accusations spread. I left my ecclesia because I believed that the way the accusations were handled was not in accordance with Matthew 18. It must also be said that the stress of the situation was unendurable. On their own, the sacrifices I had made as a gay Christadelphian were getting to be too much for me, and I now found I was subject to the same condemnation and hostility as if I had not made those sacrifices at all. Keeping my head down had got be nowhere. I was ostracised as surely as I would have been if I had taken a boyfriend to the Breaking of Bread. 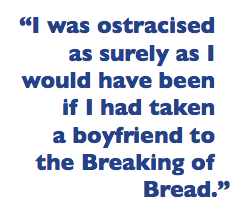 In the years following my departure, something rather curious happened. Even though I was inclined to leave the community behind me, some parts of the community didn’t
want me to go. I was contacted by other Christadelphians and ex-Christadelphians in similar positions. People who still held Christadelphian beliefs. People told me their stories, how they too had been ostracised, but still kept their faith. Although some of the stories were joyful, most were sad. One or two were tragic. I will never forget hearing about one ‘young brother’ who was put through reparative therapy, a brutal, harmful, and discredited ‘treatment’ designed to change sexual orientation.

The turning point was when I got a letter from an old Christadelphian friend, more than ten years, I think, after we last spoke. In the subsequent correspondence, his attitude towards gay people became considerably more positive, and I was reminded of the importance of pastoral care and sharing one another’s burdens. I decided something had to be done, and that is what brought me to where I am today, arguing that you can be Christadelphian and approve of same-sex relationships.

2 thoughts on “Growing up Christadelphian and gay”

This site uses Akismet to reduce spam. Learn how your comment data is processed.